Skip to the beginning of the images gallery
Be the first to review this product
Out of stock
Code:
px472

A finely painted oil showing a hazy, mountainous landscape with lilac peaks fading into the blushing sky in the background. The middle-ground shows fishing boats casting out their nets and a Gothic style ruin on an outcrop of rock, jutting into the lake. In the foreground stands a beautiful young woman holding a wooden board with four fresh trout on a bed of hay. She is wearing a bright blue, hooded jacket belted around her waist and an orange skirt to her ankles. Her bare feet signify her lack of wealth. She has a wonderfully serene expression on her face which adds to the overall atmosphere of calm in the painting. Amongst the gestural, hazy landscape are areas of exquisite details, particularly the young woman's face and the trout and hay. Yellow flowers and finely picked out leaves litter the ground at the front of the painting.

The artist has initialled to the lower left corner. The painting is presented in a fine, unglazed, gilt effect 20th Century frame with acanthus leaf strapwork and brushed gilt cove.

The painting has slight discolouration but the colours retain much of their original brightness. The painting has some craquelure across the surface and there are stretcher marks visible around the edge of the painting. Inspection under a UV light shows two small areas of restoration to paint losses, one in the top left quadrant and one to the very left edge. The canvas has been relined. The frame is in fine condition with a loss to the bottom right edge which has been fully restored.

A native of Galway City, Haverty was first recognized in 1814 after sending a painting to the Hibernian Society of Artists. His 1844 piece, The Limerick Piper, became one of the most famous 19th century lithographs. The work features Patrick O'Brien, a blind Gaelic piper from Labasheeda, popularized by Haverty's painting. He painted genre scenes, landscapes, and portraits, a fine example of the latter features Daniel O’Connell. Haverty died of edema on 27 July 1864 following a long illness, and was buried at Glasnevin Cemetery. In November 2003, one of Haverty's paintings sold for a record €227,000 at one of Christie's auctions of Irish art. 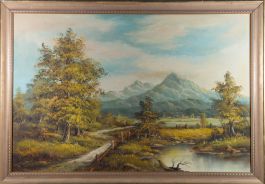 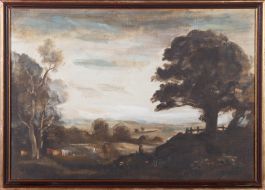 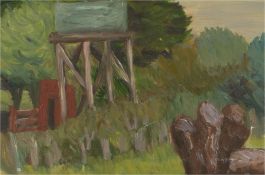