Skip to the beginning of the images gallery
Be the first to review this product
Out of stock
Code:
ps828

A limited edition silkscreen print by the well-known artist Philip Sutton, entitled 'Tenby' and dated 1989. A dynamic and colourful landscape work, with harbour vessels under an abstract sky. Inscribed '53/80'. Signed and dated and inscribed. On wove.

In fine condition overall. Some light scuffing to the upper edge.

Philip Sutton studied under William Coldstream at the Slade School of Fine Art, London from 1948 to 1953. He won the Summer Composition Prize and travelled to Spain, France and Italy on scholarships before returning to teach at the Slade School of Fine Art from 1954 to 1963. Sutton’s first solo show was held at Roland, Browse and Delbanco in 1956, the year he was elected a Member of the London Group. This was followed by many solo exhibitions throughout the UK, including the Geffrye Museum, London (1959), Retrospective at Leeds City Art Gallery (1960), exhibitions in Newcastle, Bradford and Edinburgh in (1961) and at the Graves Art Gallery, Sheffield (1971). In 1977 the BBC Arena Programme made a film about his work and a retrospective exhibition of his work was held at the Royal Academy of Arts, London. His first exhibition in Paris was held at Galerie Joel Salaun in 1988. Sutton has travelled extensively in order to paint. In 1963 he went to Australia and Fiji, returning the following year with a large exhibition of tropical landscapes.

In 1980 he returned to Australia to paint for four months, resulting in an exhibition of large paintings of the Great Barrier Reef which were exhibited at the Royal Academy in 1982. He has also painted in Cornwall, Ireland and Crete. Sutton has received several commissions, including the design for two tapestries at West Dean College in 1984 and 1986, a London Transport Soho Poster, and a set of new stamps for the Post Office in 1987. In 1986 he became involved in painting ceramics and was commissioned by Pentagram to paint a wall of tiles at the Art Tile Factory, Stoke-on-Trent. An exhibition of his painted ceramics was held at Odette Gilbert Gallery, London in 1987. In 1995 he began work on a series of paintings on William Shakespeare which continued for three years. Sutton was elected a Royal Academician in 1988 and lives and works in Pembrokeshire, Wales. 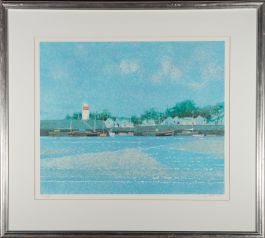 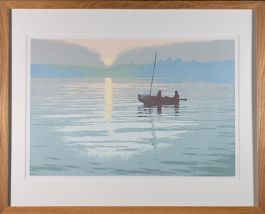 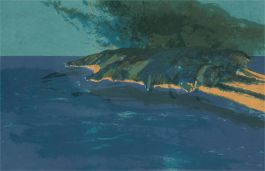 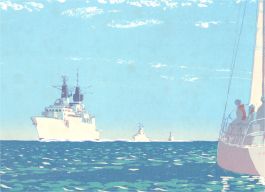