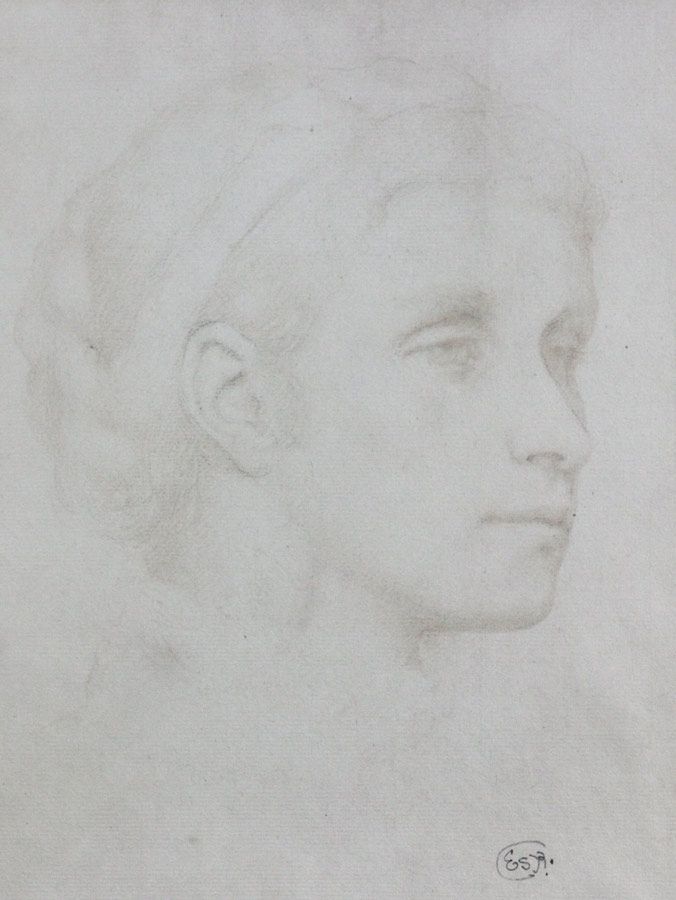 Skip to the beginning of the images gallery
Be the first to review this product
Out of stock
Code:
fu5

Ethel Slade King (1862-1941) - A woman. Absolutely typical of her faded out, almost invisible style of portraiture. Monogrammed lower right. On watermarked laid in fine condition. I am showing a photo of a portrait of a man which I once owned for comparison of the signature and sytle.George Gascoyne artist, (b. 1862 Sittingbourne, Kent, d. 1933 Hungerford - Married I: 1890 Isabel Hugonin b. 1866 Torquay, d. 1894 Kensington aged 28 - Married II: 1900 St. Geo. Hanover Sq Ethel Slade King b. 1862, d. 1941 Warminster Mrs. Gascoyne of Holmans, Butleigh advertised in the Western Gazette 21 Jun 1918 for two servants "owner at Holmans" On 28 Jan 1916 she had advertised for a Cook. Probably Ethel the wife of George Gascoyne the painter who in 1919 painted 'Homewards' - inscribed on the reverse Butleigh, Glastonbury. Sold at Christies East 1995 for $7,500. He did other rural sketches and etchings in a similar vein whilst here in Butleigh. A painter and etcher, George Gascoyne painted landscape, genre and literary subjects. He studied at the Slade School, and later married Ethel Slade King. He exhibited at the Royal Academy from 1883 with works such as The Knife Grinder, The Good Samaritan, and The Miry Beasts Retreating frae the Plough?Burns. Gascoyne also exhibited at Glasgow Institute of the Fine Arts; Walker Art Gallery, Liverpool; New English Art Club; Royal Society of British Artists; Royal Society of Painter-Etchers and Engravers; Ridley Art Club; Royal Institute of Oil Painters; and the Royal Scottish Academy. He sometime lived at Aldbourne, Wiltshire, and was a Member of the Royal Society of Painters and Etchers. Peter Nahum biography On the 1901 census Ethel S. Gascoyne appears at 8, Cheyne Court, Chelsea with her widowed mother Sarah King and described herself as 'artist'. Her husband was staying at 40, Arts Club, Dover Street, St. George, Hanover Square on the night of the census. They had no children. They were both absent from the 1911 census and it isn't known when they arrived in Butleigh, nor exactly when they left. Size: 33 x 26cm (13" x 10.2")
More Information
Reviews
Write Your Own Review
Delivery

View in Room
Need to Know