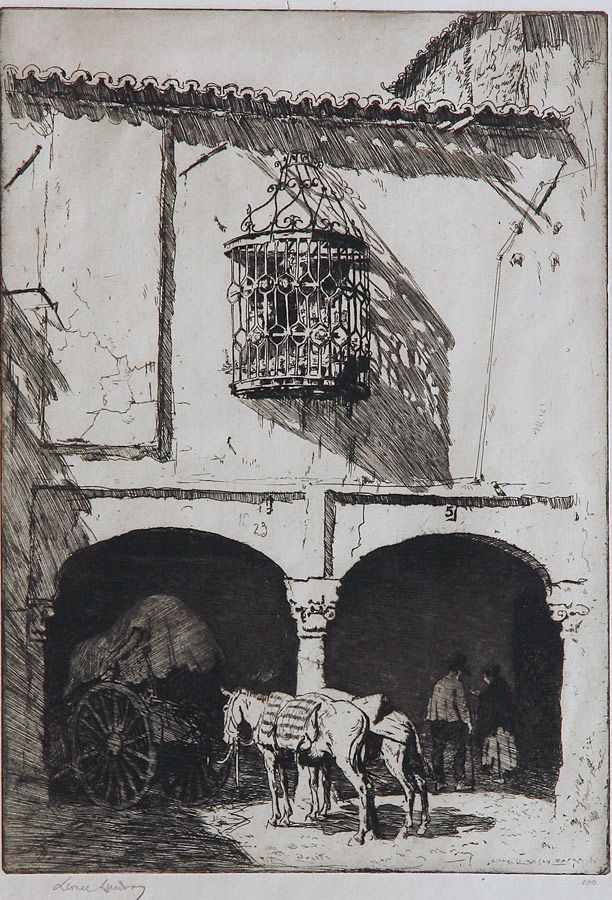 Skip to the beginning of the images gallery
Be the first to review this product
Out of stock
Code:
ek21

Lionel Lindsay - In Zafra Market 1929. A fine etching. Pencil signed and numbered 100. Signed and titled in the plate. Edition of 100 proofs. Superb condition. On laid. Published by Colnaghi and Co.Sir Lionel Arthur Lindsay (17 October 1874 ? 22 May 1961) was an Australian artist and brother of artist and illustrator Norman Lindsay. Lindsay was born in the Victorian town of Creswick, into a creative family - he was the brother of artist Norman and artist and critic Daryl Lindsay and of the relatively unknown artists Ruby Lindsay and Percy Lindsay. Lionel Lindsay became a pupil-assistant at the Melbourne Observatory (1889-1892) and later studied at the National Gallery School, Melbourne and in George Coates' rooms. Lindsay taught himself etching and engraving in the 1890s while a student, immediately prior to his first trip to Spain and England. On his return to Australia he settled in Sydney as a freelance artist and journalist, contributing to the Bulletin and other magazines and newspapers. In 1907 he held an extremely successful exhibition of etchings in Sydney with the Society of Artists. The two decades after 1907 saw him active with the Society of Artists and in 1921, when the Australian Painter-Etchers' Society was formed, Lindsay was its first president. He began to exhibit in London in 1923 and had his most successful exhibition of that period at Colnaghi, a London art dealer, in 1927. Colnaghi's Galleries and the critic Harold Wright led British interest in Lindsay's work and guaranteed his reputation as a major British printmaker and watercolourist. Key themes in his oeuvre include the swagman in the outback, old Sydney, portraits of prominent Australians, romantic views of Spain and Arab culture, a series of classically inspired works and birds and animals. Lindsay became a Trustee of the Art Gallery of New South Wales and was knighted for his services to Australian art in 1941. In 1942 Lindsay published Addled Art, a vituperative and anti-semitic attack on modernism in art. Lindsay's views on Modernism, however, were not, however as clear cut as Addled Art would have it seem: for example, Lindsay supported William Dobell's Archibald Prize through the courts. He was good friends with Ernest Moffitt and published a book on his art. A Consideration of the Art of Ernest Moffitt was the first monograph written on an Australian artist. Lindsay died in Melbourne on 17 October 1961. The Lionel Lindsay Art Gallery and Library, in Toowoomba, Queensland, holds rare books, manuscripts and maps, and over 400 art works by members of the Lindsay family and other significant Australian painters, including Frederick McCubbin, Arthur Streeton, Tom Roberts and Rupert Bunny. Size: 25 x 17.5cm (9.8" x 6.9") Sheet: 39 x 23cm (15.4" x 9.1") Plate: 25 x 17.5cm (9.8" x 6.9")
More Information
Reviews
Write Your Own Review
Delivery

View in Room
Need to Know