When one considers the stereotypical vision of a 1960s or 1970s British domestic interior, various images might immediately spring to mind: psychedelic wallpapers; Formica counter tops in earthy colours with crockery to match; space-age furniture; and the avocado bathroom suite (“What were we thinking with that one?” I hear you cry). Beneath the imposingly grey, concrete walls of the brutalist architectural movement, a rich cacophony of vibrant colours had exploded within the home. This was also the era of Pop Art, a movement that reached its height in the 1960s and celebrated vibrancy, kitsch and popular (“pop”) culture. Indeed, many of the artists associated with the movement - such as Andy Warhol, Roy Lichtenstein, Sir. Peter Blake and Richard Hamilton – have a celebrity status that has lasted well into the twenty-first century.

The British artist, Joseph Henry Lynch (1911-1989), can be considered as a worthy contemporary of these great names. Lynch’s own vibrant, mass-produced prints epitomize the era and the Pop Art movement but his biography has since been lost, along with many of his works. His modern anonymity and the rarity of his artworks are surprising. No self-respecting ‘kitsch’ interior of the 1960s and 70s was complete without a copy of one of Lynch’s sultry female portraits. In fact, they were in such demand that one could purchase a “Tina,” a “Lisa” or a “Wanda” at Boots or Woolworths, where they were sold in their thousands. Indeed, this still from Stanley Kubrick’s A Clockwork Orange (1971) - a film that clearly sought to stereotype the contemporary domestic interior of the era - features two of Lynch’s most famous works, Tina (1961) on the left and A Nymph (c.1961) on the right. 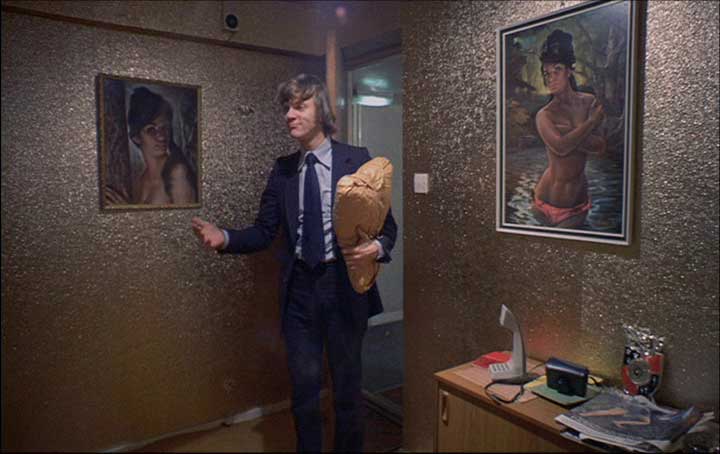 Tina is Lynch’s most iconic work, having been featured in both Kubrick’s film and on the front cover of Edwyn Collin’s 1960s-inspired LP, A Girl Like You (1995). To these later generations, Tina and her friends clearly embodied the spirit of the 60s.

Lynch’s style is instantly recognisable. His portraits have something of the “Bond girl” about them and the smooth finish to his paintings give an ethereal glow to his subjects that enhances their youthful beauty.

However, Lynch’s portraits are not limited to his “poster girls.” In stark contrast to his typical style, this painting of the artist’s daughter in our collection is a tender and reserved rendering of a loved one. Unlike Tina, Lynch’s daughter does not directly engage with the viewer. She is looking away to the right, modestly covered and with “tom-boy” features. This is not an exotic, curvaceous beauty in some fantastical scenario – but a real girl whose beauty and vibrancy stands out against a rather drab background.

Although he is best known for his portraits, Lynch was also an accomplished landscape artist. The vibrant, detailed rural scenes in our collection are rendered to an astoundingly photorealistic degree. It seems as though Lynch’s originals are always painted in a photographic manner with their reproduction in mind. They are often framed by a yellow border into which they gradually fade, rather like a specific type of old photograph. The fine details and striking palette also lend themselves well to printing and many of the originals were reproduced as calendars in the 1960s and 1970s.

Lynch’s work certainly reflects an artist with a signature style and an excellent eye for detail. He appealed to the masses, as many Pop Artists did, and was accordingly celebrated in his own time. In the following decades, public taste self-consciously moved away from the very definitive styles of the 1960s and 70s and, no doubt, many of Lynch’s works were lost during this time. It was perhaps his frustration at this that caused Lynch to destroy many of his works before his death in 1989, leaving us with very few originals to remember him by. But his success at capturing his own era cannot be denied and his few remaining pieces have now become very popular with collectors. Recent fashions for “vintage” interiors have allowed the demand for Lynch’s works to once again be considered key pieces for any modern, kitsch home.