The Adams Family: Three Generations of Artists and Photographers

The Adams Family: Three Generations of Artists and Photographers

The Adams family were three generations of artists and photographers based in Reading. The family business began with Walton Adams (1842-1934) who was the co-inventor of the dry-plate process and could list Queen Victoria amongst his most notable sitters. Of Walton’s seven children, two followed their father into the photography business. At Sulis Fine Art we are pleased to introduce you to artworks by his highly accomplished sons Marcus Adams (1875-1959) and Chris Adams (1867-1960), Marcus’s son Gilbert Adams (1906-1996), and Gilbert’s wife, Rosalind Adams (née Thuillier, 1939-2015).

Marcus Adams is well known for his portraits of the Royal Family, many of which were reproduced all over the world. They include several images of the young Princess Elizabeth and Princess Margaret, capturing the closeness of the family. A very large number of these Royal portraits are now held by the National Portrait Gallery.

Whilst Marcus was starting to gain a reputation for the photographic portraits for which he would become famous, he continued his artistic education by studying in Paris and travelling the globe. Our collection of graphite drawings by Marcus provides a fascinating insight into this period of his life and the places he visited. One of these is the Swiss Alpine Village of Saas-Fee, which the artist depicts with a clear admiration for the surrounding sublime mountain landscape. He travelled throughout Europe and we also have a large number of drawings depicting Majorca, Venice and the French regions of Nice and Antibes. He also depicted various idyllic scenes around England as well as travelling further afield to Algeria and other parts of North Africa.

Marcus’s compositions relay the balanced eye of the photographer whilst his realist style and faithfulness to nature betray his admiration for the beauty of the often remote regions he travelled to. Marcus exhibited his paintings both in St Ives (STISA) and at the Reading Guild of Artists, amongst other venues in and around London.

Marcus Adams 'On the Coast' and 'Market Scene'

Chris Adams studied at Reading University and became best known for his miniature paintings. Although the popularity of small portraiture began to decline in the 20th century, Chris experienced considerable success and he was commissioned to paint two miniatures for the library of Queen Mary’s Dolls’ House, both preserved in the Royal Collection. He exhibited at the Royal Academy, Royal Miniature Society and Walker Art Gallery.

Some of the most successful of Chris’s miniature portraits in this collection are executed in an Art Deco style or depict sitters dressed in 1920s haute couture. Another popular subject in his miniature works is children and he was known to use the photographs taken by his brother, Marcus Adams, who has made his name as a child photographer.

Chris Adams 'A Finely Dressed Woman' and 'Portrait of a Child'

Like his grandfather, father and brother, Gilbert Adams earned his reputation as a photographer. Most notably, he obtained a commission by the British Council to make a series promoting Britain to tourists and also directed the lighting for the Coronation of Elizabeth II. Gilbert was an incredibly talented painter and transferred his skills as a portrait photographer to his portrait paintings:

"Art and picture making with a camera are fundamentally the same, requiring such essential qualities as good taste, beauty of line, and perfect juxtaposition of tone, together with atmosphere that stirs the emotion"  Gilbert Adams, 'Photograms of the Year’ (1948) p.11.

His portraits are executed in an impressionistic and occasionally expressionistic manner. Through the medium of oil and coloured pastel the portraits in this collection convey a vibrancy and beauty of line reminiscent of the early members of the New English Arts Club. Gilbert spent part of his career in St.Ives where he became close friends with some of the major artists of the time who were working there. He first visited in 1926 to see Leonard Richmond (1889 -1965) in whose English landscapes he shared a great artistic affinity with. In some of Gilbert’s more stylised landscapes and abstract pastels, it is also easy to see the influence of his artist friend Peter Lanyon (1918-1964).

Gilbert was a prolific landscape painter and he found great inspiration in the Wiltshire landscape, which many of his works in this collection depict. Scenes of Pewsey Vale, Little Bedwyn, Avebury and East Kennet betray his love for the rolling hills and the idyllic beauty of Wiltshire’s small rural villages.

Rosalind Adams (née Thuillier) was an author, painter and photographer. Her works in this collection can be characterised by a bold use of colour and abstract design reminiscent of the Russian artist Lyubov Popova’s (1889-1924) textile designs. In other works, Rosalind balanced abstraction with figurative elements resulting in stylised Manhattan skylines and ‘imagined landscapes’. Her works in this collection are primarily pastel or watercolour but there is also a quantity of semi-abstract charcoal studies.

Rosalind published a book on her father-in-law, ‘Marcus Adams: Photographer Royal’ (1985) which included many of Marcus Adams’s finest photographs,and a text describing the life, works, and techniques of the artist and photographer. She also published a book on her friend and fellow artist Graham Sutherland, ‘Graham Sutherland: Inspirations’ (The Lutterworth Press, 1982), and has featured in a BBC television programme ‘British Masters’ talking about Sutherland. 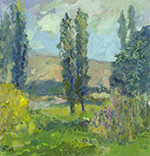