On researching the British artist Adrian Hill I was drawn into the fascinating story of his contribution to the use of art as a therapeutic discipline. He is credited with having coined the phrase ‘Art Therapy’ in 1941 – and it seems that in giving it a name he was making concrete a process which has likely been happening for centuries. It is well known that art has been a long-standing and multicultural form of expression and communication: from the paleothic period where cave markings may have been used to psychologically prepare for long and dangerous hunting expeditions; through ancient Egypt, Greece and Rome to the flourishing of art during the Renaissance as supreme human expression. It is evident that art fulfils a fundamental human need to create and communicate; but the value of Hill’s contribution was his insight that in nourishing the mind, art could heal the body.

Born at Charlton, London, in 1895, Adrian Hill showed artistic talent from an early age, studying at St John’s Wood School of Art, 1912–14. The outbreak of the First World War saw Hill serving at the front in France as a signaller and scout in the 1st Honourable Artillery Company – so as a young man he experienced the physical and psychological traumas of war first hand. Having shown some of his drawings to Charles Foulkes, Curator and Secretary at the Imperial War Museum, he was transferred to the new War Trophies Section and became the first official war artist commissioned by the Museum.

The official British war art scheme originated in the Foreign Office in late 1914, established to manage and disseminate propaganda images. Demand grew from newspaper editors for authentic depictions of the front-line, and artists rather than studio illustrators were employed for the subtle tonal complexity of their work. Hill was told precisely what to draw, which resulted in an extensive portfolio of 187 pen and ink drawings – of rather mundane subjects, which nevertheless were very acutely observed. His drawings and paintings now find home in the Imperial War Museum in London, along with archival material relating to the commissions.

Hill continued as a professional artist after the war, studying at the Royal College of Art 1919–20. The shift in Hill’s life began when in 1938 – as he describes it – he ‘fell foul to a dreary complaint called TB’. He spent time convalescing at the famous King Edward VII sanatorium at Midhurst, Sussex, and started to pass the time by drawing from his hospital bed. He describes the way in which art provided much-needed occupation for his body and mind:

‘The point I wish to make here is that rest, physical inactivity was beginning to pall, I was increasingly aware that time which had been ‘marking time’ for some weeks past was now halted and stood still – very still! And with this dread realisation came the happy discovery of how to set the pendulum in motion again, by the simple act of drawing.’

At Sulis we have examples of drawings of views from his hospital bed – of the trees in the hospital grounds – and his annotations reveal the comfort that the views provided. 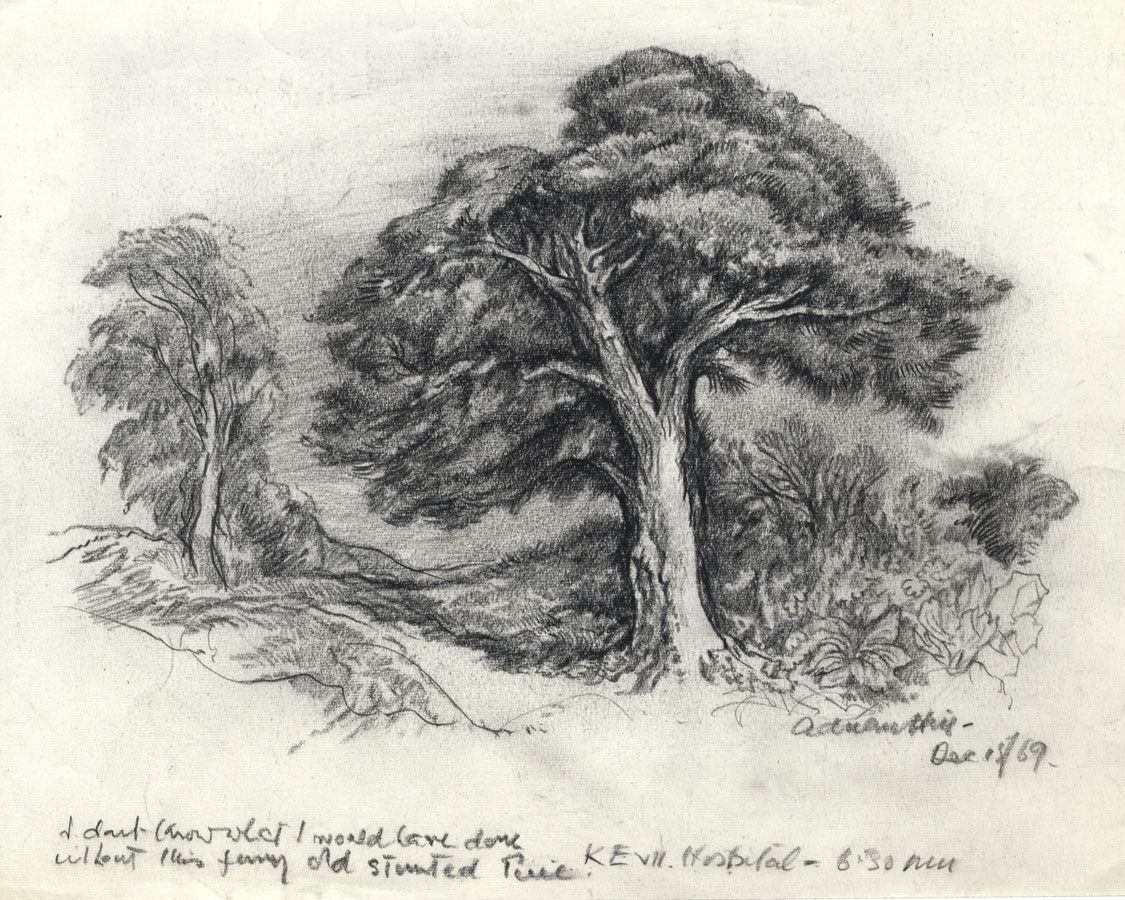 When this activity proved helpful to his own recovery, Hill was engaged by sanatorium staff to assist other patients. He explains the early days of this process making it sound natural and informal, as though not part of some grand plan:

‘It was only because I was bored, because I was an artist, and I asked if I could do some drawing, and when they found that I was very much more docile a patient, I asked whether I could get other patients to have a go too. And they did. And they liked it very much and it did them good too.’

Occupational Therapy was introduced to the Midhurst sanatorium in 1941 for service casualties and Hill was officially engaged by the resident Therapist. The news of Hill’s work spread and he started to work at other sanatoria. Not only did Hill see value in artistic practice he also recognised the health benefits of viewing art. He went on to propose and develop a scheme of hanging artwork on hospital walls in constantly changing displays – radical at a time when hospital administrations insisted on blank walls. He explained:

‘...so the patient would see something and it would bring them into touch with the artist who did it, and so they would learn a lot about art, and it would possibly want to make them draw and paint themselves.’

By 1945 Hill would publish his theories in a book called ‘Art Versus Illness’, devised as a practical scheme of therapy as a very real aid to recovery. A review of the book in the 1946 British Journal of Nursing described it as ‘of extraordinary interest and originality’. It was evidently being taken seriously by the medical profession, and indeed the British College of Nurses secured copies to make available to studying nurses.

Looking at Hill’s art reminds us that the creation of art is a process, and the resulting picture is more than an object. And when you next have a trip to a hospital, doctor’s surgery or dentist, and see art hung generously on the walls, think of Mr Hill.