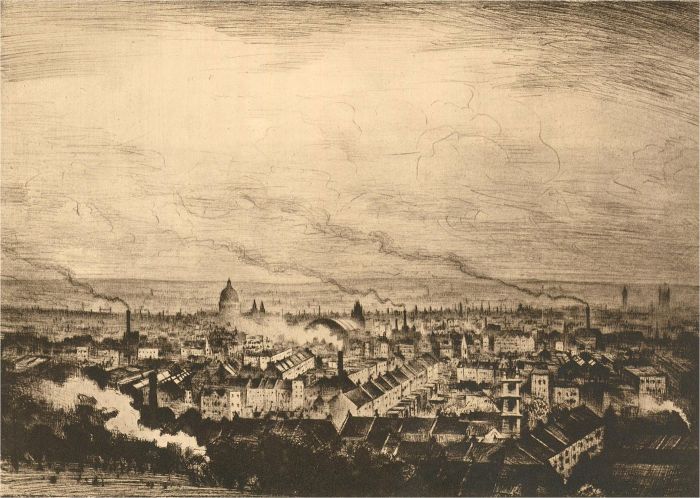 Skip to the beginning of the images gallery
Be the first to review this product
In stock
Code:
ra295

A photogravure after a drypoint etching by Nevinson, 'London from Parliament Hill' (1923). Plate V in issue thirty-one of 'Modern Masters of Etching' (1932) published by The Studio, London. On wove laid to backing wove.

There is some discolouration, primarily around the margins of the backing wove.

A collection of photogravures after etchings by C.R.W. Nevinson ARA (1889-1946), published in 'Modern Masters of Etching' (1932) by The Studio, London, with the collaboration of the artist.

Christopher Richard Wynne Nevinson ARA (1889-1946) was an English figure and landscape painter, etcher, and lithographer, who was one of the most famous war artists of World War I. He is often referred to by his initials C.R.W. Nevinson, and was also known as Richard.

Nevinson studied at the Slade School of Art under Henry Tonks and alongside Stanley Spencer and Mark Gertler. When he left the Slade, Nevinson befriended Marinetti, the leader of the Italian Futurists, and the radical writer and artist Wyndham Lewis, who founded the short-lived Rebel Art Centre. However, Nevinson fell out with Lewis and the other 'rebel' artists when he attached their names to the Futurist movement. Lewis immediately founded the Vorticists, an avant garde group of artists and writers from which Nevinson was excluded.

At the outbreak of World War I, Nevinson joined the Friends' Ambulance Unit and was deeply disturbed by his work tending wounded French and British soldiers. For a very brief period he served as a volunteer ambulance driver before ill health forced his return to Britain. Subsequently, Nevinson volunteered for home service with the Royal Army Medical Corps. He used these experiences as the subject matter for a series of powerful paintings which used the machine aesthetic of Futurism and the influence of Cubism to great effect. His fellow artist Walter Sickert wrote at the time that Nevinson's painting La Mitrailleuse, 'will probably remain the most authoritative and concentrated utterance on the war in the history of painting.' In 1917, Nevinson was appointed an official war artist, but he was no longer finding Modernist styles adequate for describing the horrors of modern war, and he increasingly painted in a more realistic manner. Nevinson's later World War One paintings, based on short visits to the Western Front, lacked the same powerful effect as those earlier works which had helped to make him one of the most famous young artists working in England.

Shortly after the end of the war, Nevinson travelled to the United States of America, where he painted a number of powerful images of New York. However, his boasting and exaggerated claims of his war experiences, together with his depressive and temperamental personality, made him many enemies in both the US and Britain. In 1920, the critic Charles Lewis Hind wrote of Nevinson that 'It is something, at the age of thirty-one, to be among the most discussed, most successful, most promising, most admired and most hated British artists.' 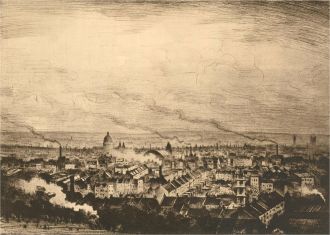 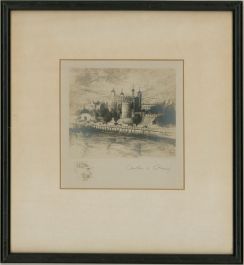 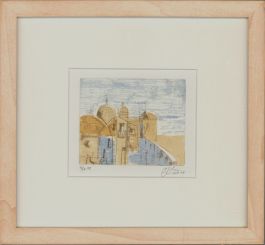 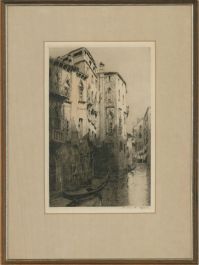 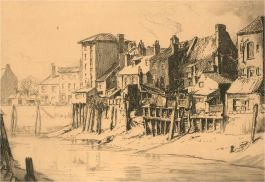 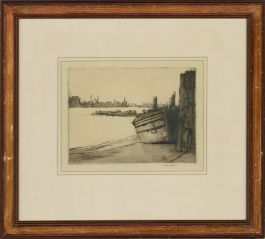